A specific punk, that is.

Punk music is not actually 60 years old. Even if you count Iggy Pop as the “godfather” of punk, he didn’t start the Stooges until 1967. But the punk that I know best, my younger brother Nathan, turns 60 on January 10.

We were often each other’s closest playmate, and nearest opponent. I was told that when he was a toddler sitting on picnic blanket for a home movie, I pushed him over in jealousy. I didn’t believe that until I saw the Super 8 movie. 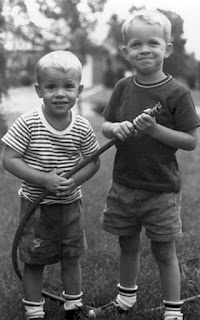 Sometimes the competition was more subtle, as in the photo above. Sometimes it was worse, but usually it was more fun. We grew up in Washington, DC. We were in Boy Scouts, explored the wild areas of Palisades, played tag; rode bikes; went to Washington Senators baseball games with our dad; watched Redskins football; played disorganized sports, like tackle football in a vacant lot without equipment; laughed at the Marx Brothers, then Monty Python.

As adolescents, I would try to use logic, diplomacy, or humor to deflect bullies and arguments leading to fights. Nathan, however, stood his ground and ended up fighting enemies, and friends when necessary. One time, a neighbor had Nathan pinned on the ground until the neighbor’s older brother chased him off, while I did nothing. ☹

I don’t mean to say Nathan was obnoxious or confrontational. Rather, he had a strong sense of right and wrong. He made friends with many of my friends, not to mention the neighborhood dogs. In fact, as young teens, we were both Washington Post paperboys. I was at war with some over-protective German Shepherds, but he was the pied piper of a multitude of local dogs. 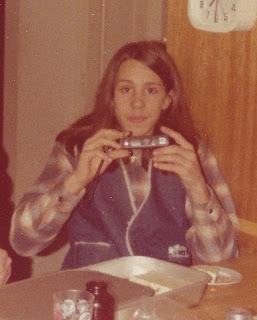 In 1975, we made a 10-minute Super 8 action movie titled Revolt!, starring 21 neighborhood kids. It wasn’t a call to revolution but involved an unnamed foreign country and many toy guns. I think the police would stop us if we were doing it today. There was a script, but it was silent with title cards. I added unlicensed copyrighted music; therefore, you wouldn’t get its full impact on YouTube.

Also in 1975, I started a rock band (Ex-Calibre) with some friends, rehearsing in our basement. We played in a church basement, at a playground, and two elementary schools. We were bad. By the next year, my new band named Djant with Glenn Kowalski (7 Door Sedan) and Max Surla was practicing in my mom’s basement. We were somewhat better, playing Beatles, Bowie, Stones, Who, and Zeppelin.

Meanwhile, Nathan’s musical taste and mine began to diverge. We had both been fans of the above bands, but I drifted towards ELP, Yes, Jeff Beck, and Return to Forever, while he got into Iggy and the Stooges.

Then 1977 and the Sex Pistols appeared. Nathan played the album for me. I was struck by the urgent, angry political challenges in “Anarchy in the UK” and “God Save the Queen” - but not converted.

Nathan, whose hair was shoulder-length like mine, said he would get a punk haircut if he had to cut his hair. When he applied for a job at the Georgetown Swenson’s ice cream shop, he was told he would have to cut his hair. Next thing I knew, he had a short spikey cut, ready for some Dippity-Do.

In the fall of 1978, I went away to college. When I opened a box of records I had brought, I found that Nathan had put the Sex Pistols Never Mind the Bollocks LP on top. I did listen to it. Then I bought a Clash LP. Then The Buzzcocks, and XTC. By the time I had started a band (The Front Lines) in college in the spring, we were playing Sex Pistols, Clash, Ramones, and Elvis Costello songs, in addition to the classics, such as Dylan, Hendrix, Stones, Who, Zeppelin, and Chuck Berry. We renamed the Sex Pistols song “God Save the Dean”.

That summer back home, a couple of neighborhood bands played in a detached garage on my block. The first band was the host’s (Bryan Fox?) band. I only remember them playing “Tush” by ZZ Top. Next was The Slinkees, which was the precursor to The Teen Idles, but with Mark Sullivan singing. I remember them playing a parody of “Free Bird” called “Dead Bird,” with Sullivan shouting at the end.

Sullivan went away to college that fall, and Nathan became the singer for the band, who took a new name, The Teen Idles, for whom Slinkees bassist Ian MacKaye also played (and later went on to form Minor Threat and Fugazi). For details, see the website for Dischord, the independent record company that The Teen Idles started. 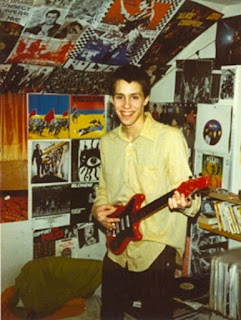 My mom, Jody, let Nathan’s bands practice in the basement. (I should say that by this time our parents had divorced.) She would say that she filtered out the music, but one time they were practicing “Do You Love Me?” by The Contours. I was upstairs with her, and she comically rolls her eyes and says “Yes, already.” Eventually, Nathan invited other bands to rehearse in the basement, but State of Alert (S.O.A.) was one band too many for Jody. From then on, her child had to be in the band for it to rehearse there. The singer of S.O.A. was Henry Rollins, known then as Henry Garfield, who I remember stage-diving at a show with no one catching him.

For sophomore winter break, I went home. The Teen Idles were having their first gig in our basement. I went downstairs with my long hair and a drink in my hand. It is not a large basement and didn’t take much to be crowded. I was leaning against a post, with people behind me standing and people in front of me dancing. It wasn’t pogoing or slam-dancing; maybe bounce-off-people dancing. Someone threw a beer all over me, and I reflexively threw my drink back. Someone else lunged at me, but he was pulled back by Nathan, who yelled above the song, “No Fun” by The Stooges, “That’s my brother, you idiot!” 😊

By the end of 1980, The Teen Idles had broken up, having released one 8-song EP. Nathan started his next band, Youth Brigade, with his best friend and future best man at his wedding, Danny Ingram, on drums.

The Teen Idles and Youth Brigade are both considered “hardcore” punk and “straight edge”, the latter meaning abstaining from alcohol and drugs. Songs like “Waste of Time” and even “I Drink Milk” were straight edge songs.

In the summer of 1981, The Front Lines made a short 7-city tour, stopping in DC to play at the Cellar Door. The band, seven young men including roadie and sound man, slept all around my mom’s house. Unfortunately, Youth Brigade had a gig that same night, so we did not get to see each other’s bands.

Later that summer, Youth Brigade, Minor Threat, and The Necros played at O’Banion’s in Chicago. Youth Brigade and some of the Necros stayed at Phil (Front Lines singer) and my two-bedroom off-campus apartment in Evanston. (This was the summer between junior and senior of college year for me.) I don’t remember too much of the show, but the Revolutionary Communist Youth Brigade, an actual communist party youth group, showed up, perhaps thinking there was a common interest in Marxist revolution. I remember an argument outside the club afterwards. The RCYB was evangelizing for a revolution, and I think it was Ian who said that if there was a revolution, the RCYB would get their brains bashed in.

Nathan and I have had arguments about music. As I said, I was not converted to punk. I never got the requisite haircut, though my hair kept getting shorter. My problem with punk was that anger is an emotion, but there are other emotions. Nathan didn’t stay 100% into hardcore punk though. He pointed out in the book, Banned in DC, that after slam-dancing took over, the bands got tougher, and the scene got male-dominated and macho. Over the years, he has often sent me mix tapes, later CDs, of bands he wants me to listen to, such as Siouxsie and the Banshees, Midnight Oil, The Rezillos, and more obscure bands. But they weren’t hardcore punk.

As the years went on, I lived in Illinois: Evanston, Chicago, Lisle, Naperville. Usually I would visit DC once (for Christmas) or twice a year. During that time, Nathan sang for Mister Id in 1987, as well as Mercy Bucket in 1988. You might have noticed the pun nature of their band names. Later, he would play bass for Land of the Lost, The Vague Rants, and Dear Season.

In 1989, I attended a Chicago Halloween party as Groucho. I got into a conversation with a punkish young woman there. She did not believe that I was Nathan Strejcek’s brother. She knew who he was and thought I was lying to impress her. I showed her my driver’s license to prove it. He was nationally famous, even several years after The Teen Idles and Youth Brigade had disbanded.

Nathan can be self-deprecatingly funny. Once, when I was visiting DC with my wife and two sons, he bemusedly told me about fan mail from Brazil – now he was internationally famous! I told my kids that Nathan had been the singer in a famous band. He said, “I wouldn’t call it singing, exactly.”

Fifteen years ago, at our cousin’s wedding in Tennessee, we stayed at the Smokehouse Lodge, which had a tennis court. Nathan has usually been able to beat me at most sports, but I thought he had put on some weight, so I’d have it easier. Nope. Still beat me at tennis. I should say that Jody played tennis, and her father coached high school tennis, and we had lessons, but I still wasn’t any good.

As I said, I wasn’t converted to punk, but in 2010 I did convert to Christianity. I tried using music to witness to Nathan. For example, “The Seeker” or “Bargain” by The Who. No results so far.

A couple of times visiting DC with my wife and kids, we had jam sessions in Jody’s basement. There always seems to be a band set-up there. My kids on drums or guitar, Nathan on bass, me on guitar, both singing “House of the Rising Sun” segueing into “Stepping Stone” (a staple punk cover of The Monkees).

Youth Brigade played a reunion gig promoting the punk documentary film Salad Days at the Black Cat in DC in December 2012. I went with my sister Mardi. It was fun to see Nathan on the stage again. After the show, Nathan complained that jumping was harder than it used to be. Well, he was 50. Ian MacKaye came backstage and recalled the O’Banion’s gig. I told the RCYB story, but what he remembered was that it was supposed to be an all-ages show, and he was pissed that they were only letting adults in.

Youth Brigade also got back together for a "punk-funk" show with Trouble Funk (DC “go-go” funk band of 80s fame; “Drop the Bomb”) in February of 2013. The “punk-funk” bill has been a cross-cultural, interracial tradition. Minor Threat and Dave Grohl have also played with Trouble Funk.

Several years ago, my younger son had a girlfriend whose stepdad was awed that Nathan Strejcek was his uncle. My son was impressed. Nathan is still famous. He still gets royalties from Teen Idles and Youth Brigade records. He currently plays bass for The Delarcos (see below). 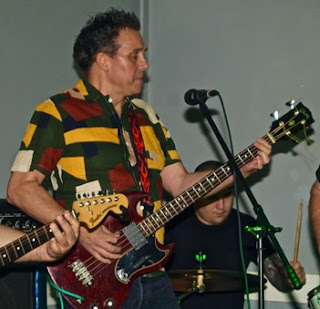 Posted by kstrejcek at 8:28 AM

That's how I pronounce my last name, so it's a pun. I have never been to Czechia (a.k.a. Czech Republic). I was born in Cincinnati, and it was my paternal great-grandfather who came from Czechoslovakia. You can learn more about me elsewhere:
Bands I have been in at Strejcek.net
Crossover Cinema blog
Kier and Cath YouTube channel
Stray Čzech Music